Since I started to be more and more interested in underwater photography, I stumbled upon groups and websites where people upload beautiful underwater pictures .

From Wikipedia, the free encyclopedia

Nudibranchs (/ˈnjuːdɪbræŋk/[2]) are a group of soft-bodied, marine gastropod molluscs which shed their shells after their larval stage.[3] They are noted for their often extraordinary colours and striking forms, and they have been given colourful nicknames to match, such as “clown”, “marigold”, “splendid”, “dancer”, “dragon”,[4] or “sea rabbit”.[5] Currently, about 3,000 valid species of nudibranchs are known.[6]

The word “nudibranch” comes from the Latin nudus “naked” and the Ancient Greek βράγχια (bránkhia) “gills“.

Nudibranchs are often casually called sea slugs, as they are a family of opistobranchs (sea slugs), within the phylum Mollusca (molluscs), but many sea slugs belong to several taxonomic groups which are not closely related to nudibranchs. A number of these other sea slugs, such as the photosynthetic Sacoglossa and the colourful Aglajidae, are often confused with nudibranchs.

Nudibranch comes from the Latin word ‘nudus’ and the Greek word ‘brankhia,’ meaning ‘naked’ and ‘gills’ respectively. This makes sense because the little flower-type protrusions on the back of the nudibranch are the exposed (naked) gills.

There are over 3,000 species of nudibranchs, from very shallow to depths of 2,500m. They are found in tropical and temperate seas as well as Antarctica, although they are most common in the shallows.

Some nudibranchs are poisonous while others pretend to be poisonous, which is evident by their vibrant colors. They feed on stinging cells of hydrozoids and store them in the rear of their body for protection. They can also ingest toxins from sponges and become toxic and inedible. Some nudibranchs even produce their own chemicals. 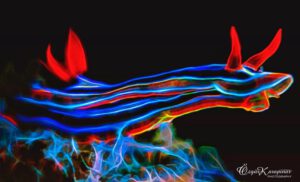 Some nudibranchs are solar-powered. These species harvest algae from plants or coral and house this algae inside of their bodies. This algae derives its energy from light via photosynthesis, which is then used by the nudibranch.

Most nudibranchs are benthic, meaning they crawl on the seafloor, but there are a few species that are pelagic and live in the water column or on the surface. One of these species digests the stinging tentacles of a Portuguese Man-of-War, transferring them from its gut to the surface of its skin as a defense mechanism. 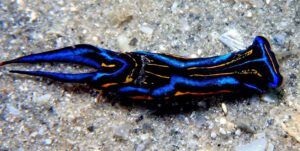 The two ‘horns’ of a nudibranch, on top of the head, are actually called rhinophores, which comes from the Greek words ‘rhino’ meaning nose and ‘phore’ meaning carrier. These are basically chemical receptors that allow the nudibranch to find food and mates. Having these two horns sticking out of their bodies makes nudibranchs more visible to predators so they have the ability to withdraw them into their bodies when in danger. If you look closely, they are almost feather shaped, which increases the surface area of the rhinophore, giving them a greater ability to detect chemicals.

Cannibalism exists in the nudibranch world. Some species eat other nudibranchs, as well as nudibranchs of their own species! This can be done with actual teeth or with digestive enzymes. 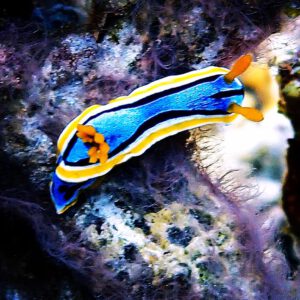 Some humans actually eat nudibranchs. Chileans and some islanders in Russia and Alaska roast or boil sea slugs and sometimes eat them raw. It has been described as “chewing an eraser.”

At least two species of nudibranchs can actually make sounds that are audible to humans! A scientist in 1884 reported sounds from two species in an aquarium that sounded like wire tapping the side of a jar, repeated at intervals. It is unknown whether these sounds are for defense, attracting a mate, or other reasons.

Nudibranchs are hermaphrodites! That’s right, each one is simultaneously a male and a female – they possess reproductive organs of both sexes. While mating they fertilize each other, although a nudibranch cannot fertilize itself. They then both lay eggs in a beautiful spiral. 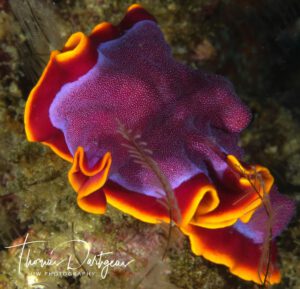 Here is a long list of names of nudibranchs: http://www.seaslugforum.net/species.htm 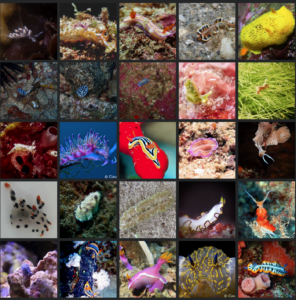 All the pictures in this post are linked from the above group, I do not own any copyright on them. If you are the author of any of them and want credit or want it removed, please get in touch with me.